- April 16, 2010
Maybe someone out there with a little experience and/or a more in-depth knowledge of Japanese can help me straighten out some names. I'm having a hard time pinning down one term.
The basic, rolling breakfall we do is most often called "zempo kaiten ukemi". Which makes sense, since from what I can tell "zempo" is "front or forward" and "kaiten" is basically "rotation" or rolling.
What I'm trying to nail down is the fall you do to the front, but there's no rolling. You basically kick your legs out from under you (backwards), land first on your forearms, then chest, then legs, sort of doing a breakdancing type or "worm" movement until you're laying face down, flat on the ground. This is one of the few images I could find of it: 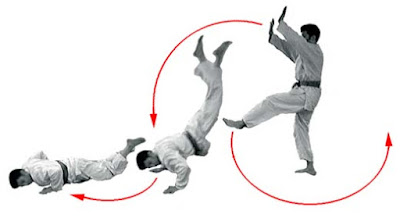 A few rare instances, I find it called "mae ukemi" which makes sense, as "mae" seems to mean "front or fore", but the confusing thing is a LOT of sites use this term to refer to the basic forward roll instead of zempo kaiten ukemi. To me, it seems you could use "zempo" or "mae" to describe either fall, but you would need the term "kaiten" included to distinguish it as a rolling type of fall; without "kaiten", I would infer you're talking about the fall pictured above.
Anyone have any different insight?
Terminology